Investment Trends in Q1 2015
The first quarter of 2015 has been a very active period for investors in UK/Irish technology businesses – £635m was invested in 133 deals of over £0.5m. Comparing this to the market’s performance in Q1 last year, investment is up 18% and the number of companies being backed rose by 56%. Q1 is usually the most active period of any year as investors and companies try to close the deals that did not quite get done before the Xmas break and squeeze in as many deals as possible before the end of the tax year. We do know that Q4 last year was slower than expected which will have had an impact as these transactions were carried over into 2015, but we do think that there is good evidence that the market is still growing rapidly.

A particular growth area is software – up 70% by value and 112% by volume over 2012. It is still well behind the investor’s support for internet service companies (taking only 1/3 of value invested) but the increase is a welcome boost. We will look at the underlying trends in Software later this year.

In March, Ascendant identified 53 deals over £500k. In the 19 years that we have tracked and analysed this market there have only been 3 months when a greater number of deals were recorded – September, October and November 2000 – just before the crash. Anecdotally we know that many of the people in the industry are becoming increasingly worried that the long disputed bubble is now with us. We still do not actually think that is the case. The simple growth of the market is neither a sufficient nor necessary reason for a bubble. Institutional syndication is still running at just under 40% of deals which is the level it has been for 6 years – no change there. The number of institutional/professional players in the market continues to increase – there is no sign of failure or withdrawal. The availability of EIS/SEIS tax reliefs continues to attract private investors to the market and the growth of business angel groups all over the UK and the emergence and scaling of crowdfunding platforms allowing companies to access this capital. It would be easy to conclude that this angel money has boosted activity at the bottom end of the market which could lead to companies being unfunded as they grow. However the evidence is that the market is growing at all levels – see chart below. So for now, we believe that there is no bubble in the UK and Ireland but that might not be true in other places… 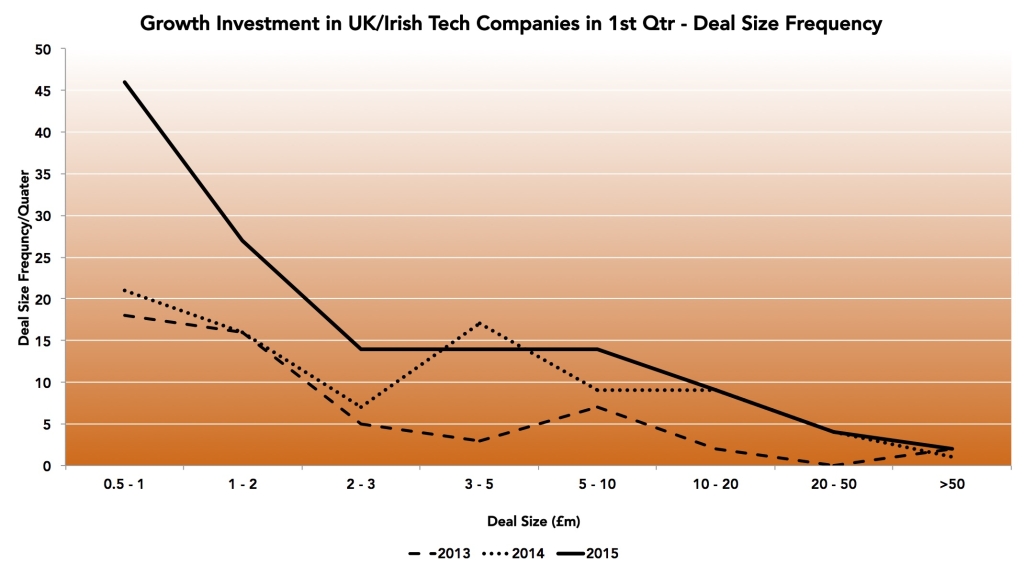 The chart above shows the current structure of the UK market. Just over 1/3 of companies raise less than £1m and only just a little over 10% receive rounds of over £10m. Despite the growing level of activity over the last 3 years there has been little movement in this structure. The data suggests that the much “discussed” funding gap is less obvious than many commentators have stated. Capital would appear to be available at all levels of the market but naturally reducing at higher amounts. However in real life, these simple statistics do not emphasise the trials of companies’ when raising larger amounts of capital – whilst it is available it is far from easy to access.

In previous PageOne reports we have highlighted concerns regarding the concentration of venture investments in London based companies. Again in Q1, 50% of deals done in the UK and Ireland in Q1 were to finance companies in London. Whilst high as this is, it is not unduly so compared to recent years. The bigger issue is the amount of money being invested in these companies. 77% of all money invested in Q1 went to businesses based in London. None of the other regions we monitor – Scotland, Ireland, The North, Midlands, Cambridge, Thames Valley and the South West – captured even 10% of the value invested. The relative absence or shortage of institution venture capital around the country is a major issue. London based VCs have no particular bias against investing outside of the capital, but statistically they do so rarely. We believe that the solution to this will be some combination of companies from the regions being promoted to the London market on a more consistent basis and steps being taken to re-establish regional funds or a true national fund targeting venture investments rather just late stage profitable businesses.

Finally, we always like to look ahead and whilst it is still early to predict how 2015 will pan out, our best guess right now for the year is around 400 companies will receive £1.9bn. Let’s hope that the frenetic pace of deal completion in Q1 is sustained throughout the year.

Looking more generally, we have summarized our analysis of the quarter in the PAGEONE report. This highlights a number of trends – including: