The capital is driving the UK technology boom, with the highest VC funding levels since 2001. But are we in a bubble?

Britain’s venture capitalists (VCs) are splurging on tech start-ups again, in a sign the economic recovery is gathering pace. The sector raised £856m in the first half of 2014, 93% of the total raised in 2013 and 37% more than in 2010, according to research by Ascendant Corporate Finance.

The engine of this growth is London, where tech funding has been so strong in the first nine months of this year, at £643m, that it is now ten times higher than in 2010, according to research commissioned by London and Partners, the promotional arm of the mayor’s office.

This, it said in a statement, highlighted the success of initiatives like Tech City and London Technology Week, both of which London and Partners also promotes. Funny, that.

While these may have been effective in fostering London’s tech boom, their role shouldn’t be overstated. The UK may owe its current growth in tech funding to London, but London owes it to internet and mobile startups, which have been based there for some time. According to Ascendant, 92 companies in that sector raised £520m in the first half of this year, over twice as much as the same period last year. A whopping 88% of the money came to the capital.

Look more closely, and you see that the most significant areas of growth are in snazzily-titled subsectors like fintech (finance technology) and fashtech (erm, fashion technology), which are historically tied to London.

Wherever the funding is taking place and in whatever sector, it’s surely good news for the economy – unless we’re in a bubble, of course. Ascendant expressed similar concerns in the spring, noting that funding levels were the highest since 2001 and syndication levels (more than one investor funding the same deal) were low, but now says the warning signs have eased. Phew. 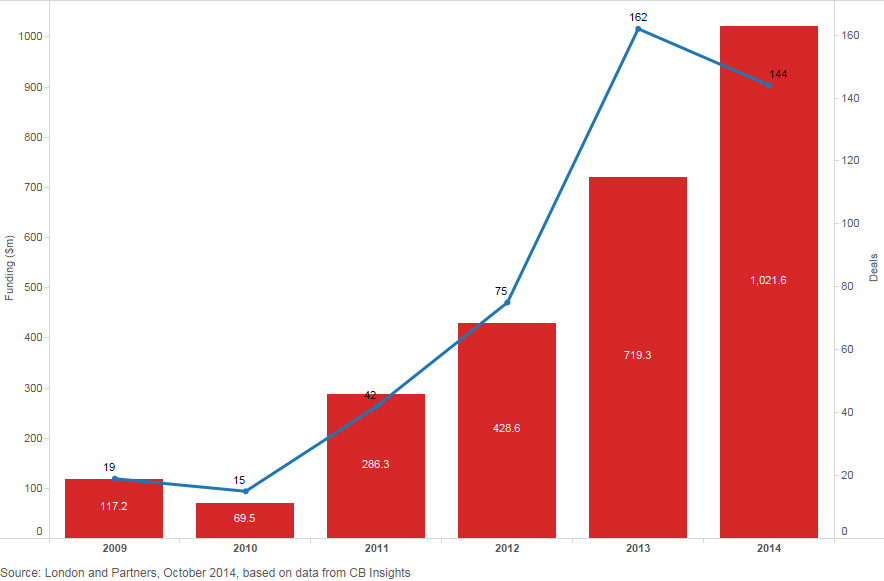 London’s investments (red) and deals (blue) are both on the up, as the recovery gathers pace.