Extracted from an Article in Infinite Magazine (see http://www.research-innovation.ed.ac.uk/News/Infinite-magazine) .

Until August this year, Edinburgh-based FanDuel held the record of raising more venture capital in a single investment round than any other technology business in the UK. However, it was then trumped by online food delivery company Deliveroo, which raised £213 million.

The huge Fanduel transaction was in contrast to a key trend in the venture finance om recent years – the growing dominance of investment in London based technology companies.

In the late nineties 1/3 of all venture deals in the UK involved London based technology businesses. It can be seen from the map below, which covers 2015 deals, that is no longer the case. 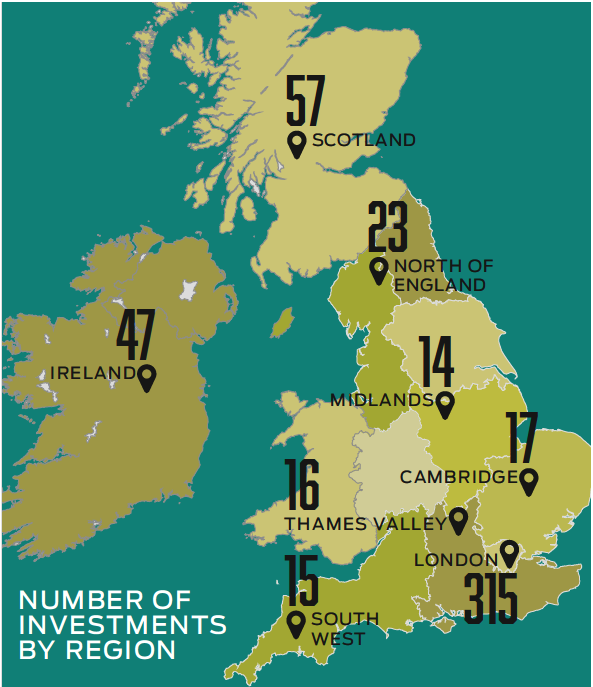 London based tech companies clearly dominated investors interest last year and in 2016 the investment has concentrated still further inside the M25 . However, contrary to popular belief, Oxford and Cambridge are not next in line as leading areas for technology development and venture investment. Scotland and Ireland are the next most active regions and have been for many years.  Nevertheless, average deal sizes are a concern outside of London as they tend to be much lower. For example, in Scotland (ignoring the highly unusual Fanduel deal) the average deal size in 2015 was £2.4 million, which is half the average deal size for London.

The picture for life science companies is quite different.  In 2015, London based businesses completed only 26% of UK/Irish deals.  Scotland and Ireland were close behind with 19% and 18% respectively.  All other regions had single digit percentages.  Scotland’s performance is impressive, but its average deal size is amongst the lowest of the regions for life science businesses. The reasons for this are varied but include bias to low capital intensity businesses (medtech devices rather than drug discovery), prevalence of angel rather than institutional capital, and often poor access to venture funds.

The analysis for cities is also revealing.  Companies in the Scottish cities of Edinburgh (36 tech deals in 2015) and Glasgow (8) have been successful at raising finance, but the scale of difference with London (309) is daunting.

Edinburgh is one of the most successful cities in the UK when it comes to technology company formation and development. However, most investors are based in London and all UK companies who need significant investment will need to spend some time in the UK Capital.   The venture market is booming so maybe it is time to buy a plane or train ticket…